It’s been a crazy couple of weeks, so I’m just going to put up a nifty little picture.  But since I generally try to write about 1000 words, this pic ought to do the trick . . .

In case you can’t make out the sign on the river bank, it says that the average depth of the water is 3 ft! 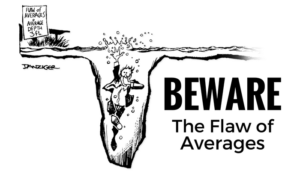 Sometimes an average is a useful number, but we get ourselves in some deep water if we assume that there is no variation across the range of data points from which that average emerged. Frequently, there is a lot of variation. And if that variation clusters according to another set of characteristics, then we can’t spend much time celebrating anything no matter how good that average score might seem.

Make it a good day,

One thought on “Beware of the Average!”

This site uses Akismet to reduce spam. Learn how your comment data is processed.